One year ago, due to the rapid proliferation of the international financial crisis, Chinaâ€™s machinery industry suffered a huge impact. After the countryâ€™s full implementation of the package plan to deal with the crisis and the implementation of adjustment and revitalization plans for the equipment manufacturing industry and the automobile industry, the machinery industry has overcome unprecedented The difficulties have returned to the track of steady and rapid growth. In the first half of this year, the production, sales, and profit indicators of the machinery industry all recovered sharply compared with the same period of last year. Imports and exports of foreign trade picked up slightly, and the rebound to the good foundation was further stabilized. At the same time, however, there are still some uncertainties that warrant attention. Looking forward to the second half of the year, the machinery industry is expected to continue its steady growth on the basis of further improving its work in all aspects of structural and structural changes.

Rising to a better foundation

In the first half of 2010, the machinery industry continued its upward trend since the fourth quarter of 2009. Both the production and sales growth exceeded 35% and the growth rate reached a new high in recent years. In the first half of the year, the machinery industry completed total industrial output value and sales value of 6.59 trillion yuan and 6.44 trillion yuan respectively, a year-on-year increase of 36.94% and 37.94% respectively, a sharp rise from the low of the same period of last year by 29.66 and 31.15 percentage points.

Affected by last year's base figure, the growth rate of production and sales this year showed a trend of stabilizing before and after becoming high. From the trend of year-on-year growth in output value, the monthly average of the machinery industry fell by about 2%.

In the first half of the year, the growth of production and sales in various sub-sectors was generally significant. The growth rate increased sharply compared with the same period of last year. All 13 sub-industries showed double-digit growth, of which 9 sub-industries had growth rates exceeding 30%, such as the output value of the automotive industry. The growth rate was 48.9%, 54.42% for the construction machinery industry, 41.44% for the machine tool industry, 37.14% for the mechanical basic parts industry, 37% for the internal combustion engine industry, and 32.77% for the civil-run industry.

The majority of product output has grown generally

In the first half of the year, of the 119 types of statistical products, there were 105 products with a cumulative year-on-year increase, accounting for 88.24% of all reported products. Among them, there are 92 kinds of products with double-digit growth rate, accounting for 77.31% of all reported products. The output of major products is showing a trend of general increase, especially in areas supported by national policies such as the automobile industry, and the output is growing faster.

From January to May, the machinery industry realized a total profit of 353.642 billion yuan, a record high in the same period, an increase of 163.837 billion yuan year-on-year, an increase of 86.13% year-on-year, a sharp rise of 93.86 percentage points compared with the same period last year, and the increase in profits was much higher than the increase in sales during the same period. Among them, the automotive and construction machinery industry recorded the highest year-on-year growth rate of more than 110%; the machine tools, instrumentation, file management, basic parts, and internal combustion engine industries took the second place, accounting for about 80%; the electrician, heavy mining, and petrochemical general industries again accounted for about 40%. The agricultural machinery and food packaging machinery industry is relatively low, but it also reaches more than 25%.

Looking forward to the second half, you can be cautiously optimistic

First of all, the country has clearly implemented the proactive fiscal policy and moderately loose monetary policy. The macroeconomic situation in the second half of the year is expected to further develop. Against this backdrop, the demand for machinery products from all walks of life is expected to remain stable.

At the same time, the national strategic emerging industry development plan is being researched and formulated, which will be beneficial to the development of professional equipment and high-end technical equipment in the emerging industries such as new energy, new materials, new medicine, smart grid, and information technology. To nurture new economic growth points in the industry, it will also promote the machinery industry to speed up product structure adjustment and technology optimization and upgrading.

Many uncertainties in economic operations

First of all, although the domestic demand situation is generally better, some industries have declined. In the first half of the year, surveys of key contact companies showed that the overall demand and ordering status of the machinery industry was relatively good. In particular, the domestic demand for construction machinery, machine tools, automobiles, internal-combustion engines, and some general-purpose basic parts industries was strong, but new orders declined significantly after May; The ordering situation of equipment, power transmission equipment, heavy machinery and other industries has been not optimistic this year, and it is expected that it will be difficult for the second half of the year to recover significantly.

Second, the external demand situation remains extremely complicated. The world economy and trade began to pick up, but the foundation for the recovery of the world economy is still quite fragile and the recovery process is still quite difficult. The sovereign credit rating of some countries in the Eurozone has been lowered, and international trade protectionism has remarkably increased. These factors have brought a tremendous negative impact on China's machinery industry's external demand situation.

In addition, the cost of production factors such as labor costs has risen and business cost pressures have increased. According to the survey, since the beginning of this year, the labor costs of enterprises have risen significantly, and the cost of corporate financing has also risen. In addition, in the long run, the supply prices of raw materials such as coal, electricity, oil, transportation, and iron and steel are also difficult to maintain at low levels. All these factors have increased pressure on the cost of enterprises in the machinery industry, making production and operation more difficult.

Due to our forming experience and equipment, we can spin or press the first part of the process of forming your products, It depend on the thickness and material performance,

Choosing the right type is the key decision for each customer and one for which our experience team to happy to give advice, simple speaking, the torispherical heads, the less ressure it can withstand, Conversely, the deeper dished heads, for example Elliptical heads, hemispherical, the greater pressure it can take.

For carbon steel dished heads, we can forming this dished heads from 76-9000mm in diameter and below 250mm in thickness

The general forming process as the below sketches

Technical Delivery Condition
1,Our material (hot Rolled Unalloyed structural steel, high and low temperature steel, High Alloy steel)
We have no carbon steel plates in our stock and most of plates are from Chinese steel market or mill. Meanwhile As Japanese owed company, We can also source the plates from Japanese ex-mill if end user can`t accept ex-chinese mill.
Basically the delivery time shall be below 20days for dished heads if plates are from steel market. and Max plates width from them is below 2200mm. it means that the seamless dished heads diameter shall be below about 1800mm.
The max width CS plates that Chinese mill can do is below 4700mm,and dished heads can be seamless below 3800mm in diameter.

But if clients tolerance is higher than below Hokkai standards, it shall be provided to Hokkai prior to offer or ordering. 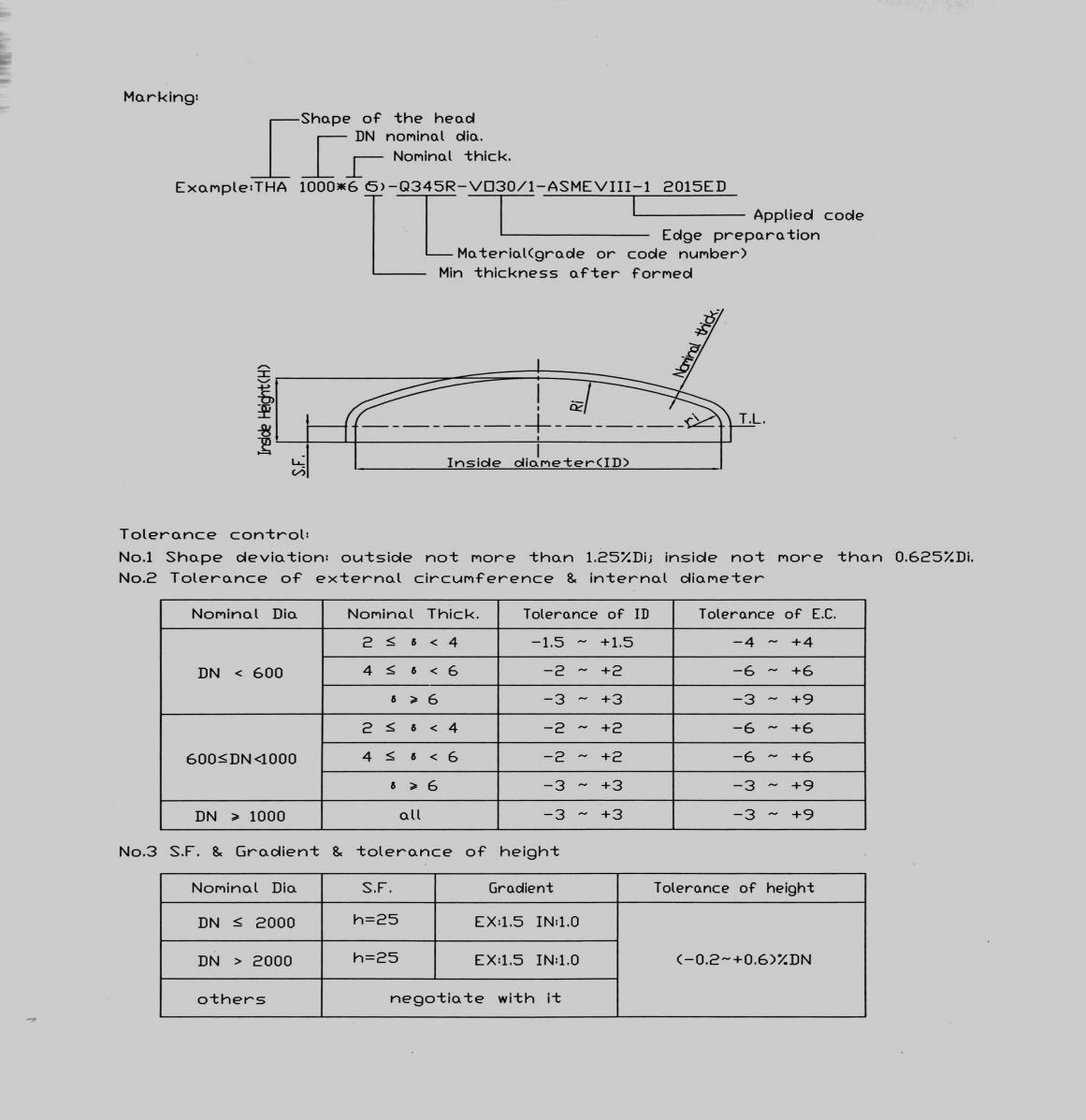